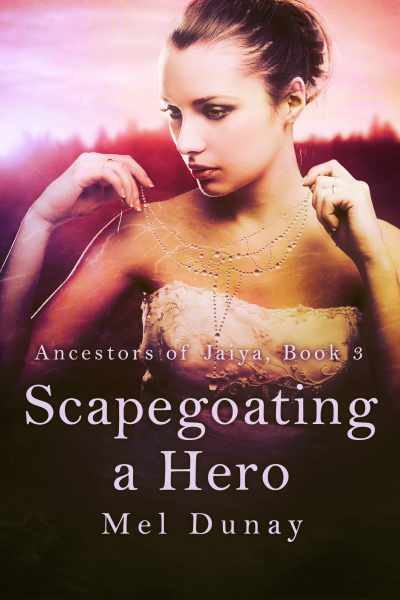 Anora doesn’t like having the ability to steal other people’s memories, but sometimes she has to use her power in her work as a spy. But when the sleazy Imperial businessman blackmailing her is killed, Anora’s husband Rijal is imprisoned. What started as a marriage of convenience will turn into true love, as Anora uses all her skills to free her husband from prison…but she has powerful enemies, and not all of them are human….

Hope everyone is having a great November!

Next week, you will see another email from me discussing the final book in the Ancestors of Jaiya series.

Queen Prasa escapes from her city as it falls to the Empire. Her only hope of survival lies in traveling with Nirav, a smuggler who pilots a type of balloon called a skyboat. Caught between her sense of duty and her attraction to the smuggler, Prasa must listen to her heart in order to find the best way to save her people. But what is the secret cargo that Nirav carries…and why is a flying monster out of the old stories hunting his skyboat?

Hope everyone is having a great November!

Hello! Free Kindle Books & Tips has graciously agreed to feature Slaying a Tyrant on their website tomorrow, and asked that I share a link to their website. I am happy to do so: I’ve been hearing about them ever since I started self-publishing three years ago, and finally had the chance to work with them. They have a really smooth, well-designed website designed to help readers find free and discounted books, and they even have their own app for Kindle Fire! Click here to check them out!

Vanti would be happy to spend her life in dance and choreography, but her family chooses her as their champion in a deadly gladiators’ tournament. To save her country from enslavement, she must defeat King Obiar the Conqueror and his magical powers. But will the brooding trainer named Gurion be her guide in the battle to come…or a dangerously handsome distraction?

Hope everyone had a great Halloween! Mine was fun but busy.

Over the next month, you will also see some posts from me discussing the other books in the Ancestors of Jaiya series, approximately on a weekly basis.

I am going to try to do a lot of dictation this year, because my word goals are extremely ambitious, so I thought I’d link to a few books I’ve found helpful. One caveat: everyone’s hardware and software needs are different, so don’t take anything any of these books say as gospel in terms of exactly what you need to buy to make it happen. Everyone recommends Dragon Naturally Speaking, for instance, but I have so far stuck to just the existing speech-to-text option in Windows 10.

Dictate Your Book, by Monica Leonelle: This one offers a lot of good, basic advice on the nature and process of dictation. One of the more interesting exercises has you practice with public domain texts, like excerpts from Alice in Wonderland, to get more comfortable with the punctuation commands for your software of choice.

On Being a Dictator, by Kevin J. Anderson and Martin L. Shoemaker: Anderson goes hiking and talks out his books as he walks, while Shoemaker dictates into a microphone in his car on his daily commute to work. Between them, they offer a lot of insight into figuring out how to work dictation into your daily routine, and what kind of equipment and software (or human transcription services) you might need, without insisting that you need to buy exactly what they use or do exactly what they do.

Fool-Proof Dictation by Christopher Downing: The best book I’ve found on the process of training yourself to tell your stories out loud. Some of the training exercises are a little out there, but you can stick to the ones that work for you if you prefer.

Happy Thanksgiving to all who will be celebrating it! Urban fantasy writer N. K. Vir is hosting a giveaway on Prolific Works (the new name for our old friends at Instafreebie). She’s pulled together a huge number of paranormal books of every length, from sneak previews and short stories, to full-length books. From mystery to romance to fantasy to horror, there’s something to entertain everyone on these long, dark evenings!

She was gracious enough to include the sample chapter from my first novel, Marrying a Monster, in her giveaway, but there’s lots more to choose from-just click here or on the link in the first paragraph to see the complete list of freebies.

I am slowly but surely making progress on the Ancestors of Jaiya series (prequel to the main Jaiya series). On Memorial Day (US), I finished the rough draft of Scapegoating a Hero, book 3 in this prequel series. I first began work on Hero in January or February of 2017, so this is the longest I’ve ever spent on a book I actually finished.

Hero is like the other books in both series in that it’s about a man and a woman with supernatural powers who fall in love while fighting evil together. But it has more END_OF_DOCUMENT_TOKEN_TO_BE_REPLACED

Hope you’re staying warm this winter! (Or staying cool, if you live south of the Equator!)

Rebekah Dodson is hosting a new giveaway of fantasy novels and excerpts on Instafreebie, which runs until February 6, 2018. You probably already have my contribution to the giveaway, which is the sample chapter for my first novel, Marrying A Monster, but there are plenty of other options to check out. Be sure to click here to check out all the freebies!

Need a little magical reading on your Kindle this holiday season? Victoria at Magic Book Deals has just the thing: she has put together a promotion showcasing ebooks in a wide variety of magic-themed genres, including paranormal mysteries and romances, and urban and paranormal fantasies. The best part is that they are all either $0.99! Just click here to be taken to the sale page, where you can check out all the great deals available.

Dean had the clever of idea of doing a followup sale to last week’s Science Fiction/Fantasy giveaway on Instafreebie. A number of authors, myself included, have taken the books associated with last week’s giveaway, and set them to 0.99 on Amazon. The sale runs through tomorrow (October 22), so click here for the full list!

Meanwhile, back on Instafreebie, Oliver Cohen has organized an interesting giveaway for clean romances, which you can check out here.