Happy start of spring! Fantasy author Katherine Wibell has organized a freebie giveaway on Prolific Works (the website formerly known as Instafreebie). She has pulled together a collection of stories and sample chapters that speak of worlds not quite like ours. Some of the covers may not be “safe for work,” but there is a wide variety of worlds and stories represented here.

My contribution is a sample chapter from Slaying a Tyrant, the first book in the Ancestors of Jaiya series: G-rated cover, PG-rated content. Feel free to check it out, if you don’t already have a copy. 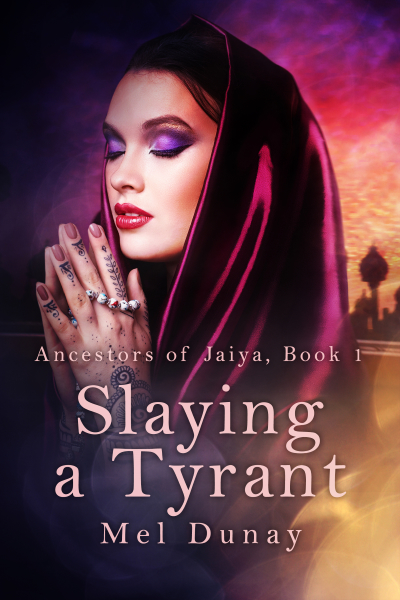 Vanti would be happy to spend her life in dance and choreography, but her family chooses her as their champion in a deadly gladiators’ tournament. To save her country from enslavement, she must defeat King Obiar the Conqueror and his magical powers. But will the brooding trainer named Gurion be her guide in the battle to come…or a dangerously handsome distraction?

Hope everyone had a great Halloween! Mine was fun but busy.

Over the next month, you will also see some posts from me discussing the other books in the Ancestors of Jaiya series, approximately on a weekly basis.

When I sat down to write the books in my upcoming Ancestors of Jaiya series, I was mostly interested in tracing a particular family through several generations of the country’s history, before their descendants appear in the main Jaiya series, and I wasn’t thinking too hard about the themes of the books. I knew love and romance would be major themes, because all the Jaiya books are clean paranormal/fantasy romances at heart.

END_OF_DOCUMENT_TOKEN_TO_BE_REPLACED

It’s getting to be that time of year, with National Novel Writing Month only a few weeks away. Last year’s NaNo project turned out to be one of those experimental attempts that don’t produce a complete story, or even something I managed to turn into one.

This isn’t that unusual for me. To give you some numbers here, I have completed NaNoWriMo 13 times, END_OF_DOCUMENT_TOKEN_TO_BE_REPLACED

Well, finally starting to see some progress here. I have the first two books in the Ancestors of Jaiya series available for preorder, with a release date of October 25, 2019. I am done polishing Book 3 in the series, and am halfway through the process of converting it into a Word document with a linked table of contents. Still to do on Book 3: writing a blurb, creating the print cover, and setting up it up for preorder.

The best case scenario is that I will somehow have all four books ready for release by October 25, 2019, and the first book in the series set to perma-free by October 28, 2019. In a worst case scenario, Book 4 may release later than the others: either early November 2019, assuming I am mostly done with it by the time NaNoWriMo starts, or sometime in December 2019, assuming I don’t manage to get a finalized copy in Word document form assembled by October 31, 2019.

On an unrelated note, I changed my website’s WordPress theme. I am pleased with it, but open to suggestions.

Winter Is…Continuing. MLK Weekend Is Coming. I am finally almost recovered from all the excitement of NaNoWriMo and the holiday season, so I’d like to write about the trickiness of soundtracking my last NaNo project.

The prologue and first chapter is basically about people gearing up for a party on a major religious festival, most of them unaware that an invasion is looming over their heads. From there, their world turns into a warzone, kind of a cross between Casablanca and Hotel Rwanda, and then turns into a mystical adventure in the spirit of Raiders of the Lost Ark, or at least the third act of Raiders of the Lost Ark.

So, I worked my way through the pre-invasion parts with no problem, using a variant of my standard writing playlist discussed here, and then a funny thing happened. As the story got relatively darker and sadder, the  Gothic but bouncy vibe of my Castlevania playlist stopped working for me.

Usually it has just enough energy to help me power through the sad stuff without spoiling the mood, but somehow all that swagger and melodrama started to grate on me. It seemed disrespectful of what the characters were going through. I tried my outlining/problem-solving playlist, and although that helped to some extent, it didn’t seem quite right.

So I turned to the playlist I had thrown together for my 2015 NaNoWriMo project (the gladiator/MMA fantasy project mentioned here.) When I had been prepping NaNo2015, my standard playlists hadn’t seem to fit it terribly well, until I threw together an unlikely mix of Ennio Morricone and Jerry Goldsmith tracks:

-From Goldsmith’s Rio Conchos: Main Title and Where’s the Water.

-And then the whole of Goldsmith’s Medicine Man soundtrack.

That had worked great in 2015 and it worked fine for the remainder of the warzone scenes and also the mystical adventure scenes as well. The funny part, which I didn’t really notice until I was mostly done? Well, the mystical adventure subplot hinges on a tree-themed religious symbol, and the question of whether it is a real thing or just a philosophical concept.

And if you’ve seen Medicine Man, or even skimmed the track listing for the music, you know that the story revolves around a fictional tree species from the Amazon rain forest.

I hadn’t chosen the playlist with that in mind, but it was an interesting coincidence.

Now that you’ve “met” Marrying A Monster, maybe it’s time for me to share a little more about the rest of the Jaiya series.

The main Jaiya series is currently three books long, and is set in “present day” Jaiya, or at least a timeframe where the technology and social developments are similar to our present day. I have some ideas for short stories or novellas about these characters, and if I come up with any more 50K-length stories in this setting, that grab me, I will write them.

Marrying A Monster is of course the first book in the series. The second book is currently titled Waking the Dreamlost, which was my Summer 2017 writing project. Monster‘s hero, Vipin, has an older brother named Marish, who is the hero of Dreamlost. I will probably spend the rest of October revising Dreamlost, along with some time in November if I finish with NaNoWriMo2016 early, and however much time it takes after that. The hope is to have it ready to go by before December 15.

Loving A Deathseer is the third book in the series in internal chronology, but the first one written. (How that happened is a story for another time.) The heroine is a relative of Vipin’s and Marish’s. This one is going to need a lot more reworking than Dreamlost, so there isn’t a timeframe for release yet.

There is also a Jaiya prequel series in the works. At this point, the only thing written is last year’s NaNoWriMo project, a fantasy romance with a gladiator/MMA fighter angle set 200+ years before Marrying A Monster. I am currently outlining a book about Vipin’s parents, which I hope to do for NaNoWriMo this year.

I also have a very rough idea for a book about Vipin’s grandparents, which I will try to write in the first quarter of next year. And there’s an even sketchier concept for a steampunk-y paranormal romance set about 75 years after the gladiator romance, and about 150 yrs before Marrying A Monster. The steampunk romance and the gladiator romance would both deal with Vipin’s ancestors. The series would start releasing sometime in 2017, barring complications.